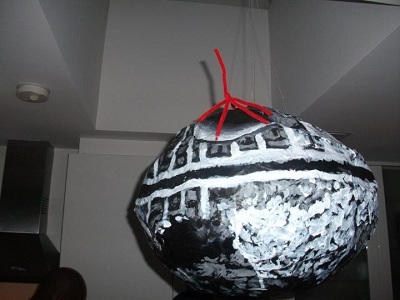 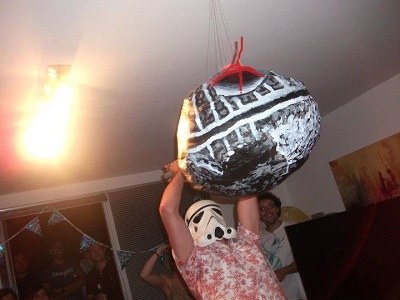 OK, so the first thing to do is to cover your table with a cloth or newspaper, so you don't get it covered in papier mache or paint. Ideally, you need to have access to the table for the minimum of a week, or as long as you're going to spend making the pinata. It took us exactly 7 days to make, working on it every evening, so I'd say a week is a good time to set aside for this. If you're mum or girlfriend are going to need the table, make sure you're especially nice to them in the run up to making the pinata. Then, get all your pinata ingredients together. Put them all out on the big table, and double check that you've got everything you need.

Basically you mix the wallpaper paste with some water, and then stir for a bit. Make sure you make enough to keep you going throughout the week. This stuff will last, as long as you keep it covered after every session. Now that you've made your papier mache mix, cut up some paper into long strips - I'd say 1 inch wide by 6/7 inches long, but no need really to be exact. Make sure you've made enough to do about 3 layers of your mould. Take your mould (in my case a lampshade), and wrap it in clingfilm, as shown below. 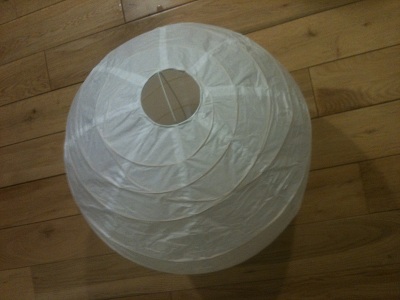 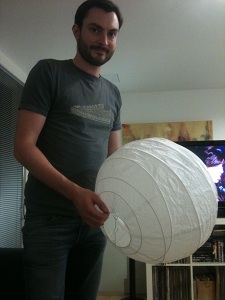 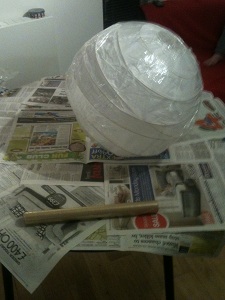 The idea with this is that once you've built up the papier mache base, you can easily remove the papier mache from the mould. Using a paint brush, start applying the papier mache mix to your strips of paper, one at a time, painting both sides of the paper. Then apply the strips on top of the cling film. Do this until you've covered the entire lampshade (apart from a whole at the top where you're gong to put sweets in) and leave it somewhere safe to dry - preferably hang it up somewhere, otherwise you may end up with a big dent in you Death Star if you leave it to dry while it's lying on something. We then left it for 24 hours, found that it wasn't dry, tried to dry it with a hairdryer (which didn't really work), before leaving it for another 24 hours. 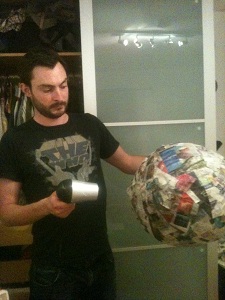 After 48 hours, we decided to add another layer. This was where it got complicated. Adding paper on top of paper, it becomes difficult to know how many layers you've added. Thinking about it, I should've tried to use different coloured newspaper for each layer. Instead, I just added more and more newspaper to make sure I'd done another layer. The problem with this, as I was later to discover, was that I hadn't completely coverd the Death Star with a second layer. We then left for another 24 hours, before adding a final layer, and leaving to dry. 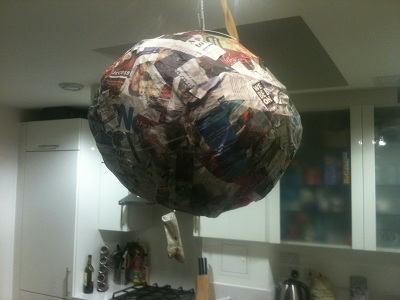 At this stage, I felt that the shell was hard enough to go about the task of removing the mould. This was my first major error, and one that I wouldn't do again. Putting your hand in through the hole at the top, peel the lampshade away from the papier mache - a task made possible due to the fact that you'd wrapped the lampshade in cling film. This is where the wire clippers come in handy. Clip through the wire that forms the lampshade, until you can remove all the pieces of the lampshade through the hole on the top of Death Star. Voila - you now have the basic form for your Death Star. As I said previously, this was where things began to go wrong. I clearly hadn't done 3 layers the whole way round, so in some parts, the Death Star wasn't sturdy enough. However, I still decided to paint it. I painted it a black base layer. This was my second error, for the following reasons:

I started to panic. I thought the whole project was ruined, and I'd wasted all my time. As it turned out I hadn't. I left it 24 hours to dry before I did anything else.

At this point, I clearly knew the areas where I hadn't added enough layers - they'd just ripped on me. So I took some time to add additional layers of papier mache where I knew the Death Star wasn't strong enough. I also started painting additional detail on it. Once I'd realised that the Death Star wasn't black, I went out and bought some grey and white paint. Using the black paint as a base, I then painted on top of it - first with grey paint, then with white paint. I took a pretty rough approach to painting, mainly just blobbing big dots of paint. I tried to tell Emily I was influenced by the Impressionist style of painting. I don't think she'd agree with me. Anyways, this is what I was aiming for with my painting: 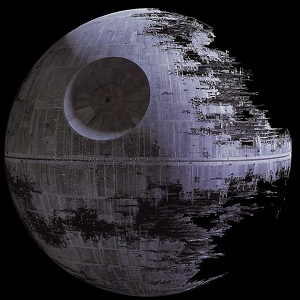 What we then had, was an almost finished shell, with an almost entirely finished paint job. 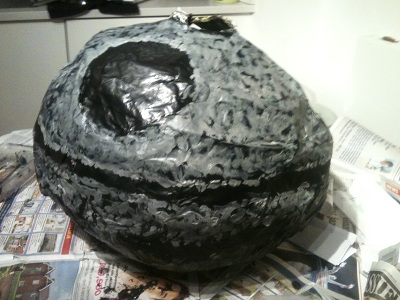 Once I'd got the shading right, we then used black and white paint to draw in the finer details - things like the laser turret and the trenches. Again, we left for 24 hours to dry. I was going to do the lid next, but I couldn't do that until I'd put the sweets in! This is what I decided to put in: 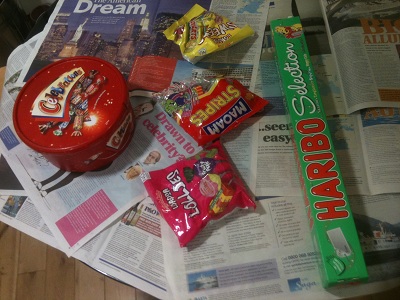 Yum! Again, in retrospect, I shouldn't have added anything that might melt - the chocolate had pretty much melted by the time we came to smash it open.

At this point, I hadn't even begun to think about how I was going to hang the pinata, or how we'd seal the top of it. I'd decided to hang the pinata with picture wire - available from all good DIY shops, but when I tried to thread it through the sides of the shell that were already complete, it was clear that that really wasn't going to work. It was at this point, that I decided to build the picture wire into the lid. I cut the wire into 2 pieces, with each piece being 4 or 5 foot long. It's difficult to describe what I did next, but I kind of interlinked these two wires into a figure of 8 inside the pinata, and then sealed it by adding more papier mache for a lid. You can see that here: 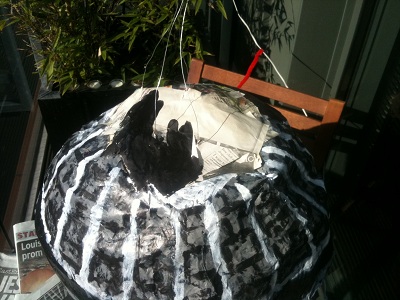 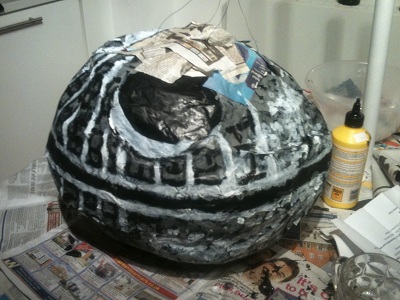 If you look closely, you can just about see the picture wire coming out of the top of the pinata. I did quite a few layers of papier mache for the lid - maybe 5 or 6. I didn't want the picture wire to be what caused the Death Star to collapse, so I made sure the lid was extra strong. Again, we left for 24 hours, to wait for the papier mache to dry, before applying the final layer of paint. 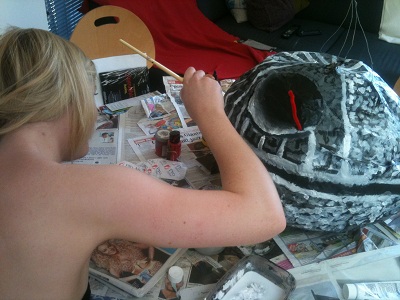 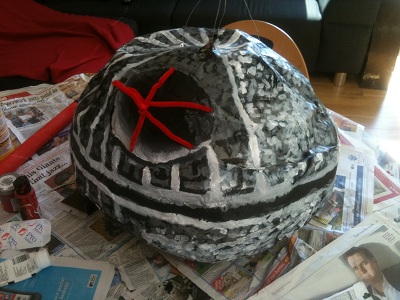 We also added the laser at this stage. Quite simply, take the red pipe cleaners, and cut into 4 pieces, each piece about 3 inches long. You'll need to make 3 of these come out from the laser turret. I used a pin to make 3 holes in the turret, through which I could poke the pipe cleaners. These three pipe cleaners need to join together at the other end - you can do this simply twisting together. You then need to add the fourth piece of pipe cleaner coming out of the other three, giving that 3-d laser effect. Now the Death Star is fully operational!

All we had left to make now was the lightsabre! For this, we used the cardboard roll from the inside of some wrapping paper, painting the top part of it red, and the handle grey. After leaving it for a few hours, I then took some black paint to it paint the handle details: 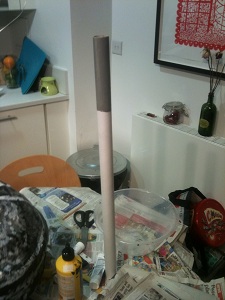 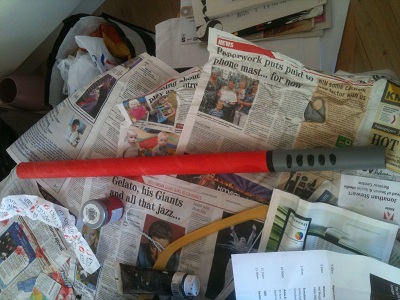 And voila, if you've done all that, you'll have your Death Star pinata, ready to smash up! We then hammered a hook into the ceiling, created a loop in the picture wire, and hung up the pinata. At this point, someone told me that you were meant to hit a pinata blindfolded (I didn't know this). That's when I came up with the idea of everyone having to wear the storm trooper helment, which had been a birthday present from my old flatmates. Anyways, happy smashing!